In collaboration with Professor Andrea Armani from USC, Orad will be co-chairing POM, the Photonics Online Meetup. The plan is to reduce the family burden of conference travel, reduce the carbon footprint and cost of participating in conferences, and make conferences more open and accessible to everyone. This project has been a joint collaboration with researchers from around the world — the organizing committee includes Igor Aharonovich from UT Sydney, Mikhail Kats from University of Wisconsin-Madison, Rachel Grange from ETH Zurich, Riccardo Sapienza from Imperial College London, and Sylvain Gigan from Sorbonne Universite.

Below is some press about POM: 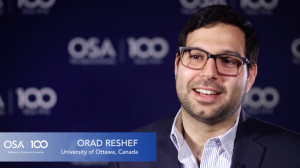 Nonlinear optical effects in epsilon-near-zero media, in Nature Reviews Materials and Manipulating the flow of light using Dirac-cone zero-index metamaterials in Reports on Progress in Physics.

Is a hot dog a sandwich?

We finally put an end to the debate, deriving the Grand Unified Theory of Sandwich (GUTS), a self-consistent classification scheme for all food. Read more at thexylom.com or download the pdf here.

Orad was interviewed by uOttawa students and featured on their website! Learn more about Orad and his research here: 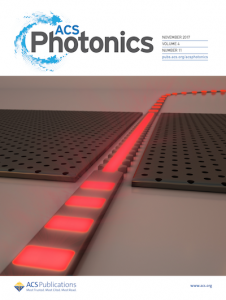 Our article, Direct observation of phase-free propagation in a silicon waveguide, featured on the cover of November’s issue of ACS Photonics, has received substantial media coverage. This paper marks the first observation of an infinitely long optical standing wave, an especially accessible physics demonstration for the general public. Below is a selected list of highlights:

Orad is awarded the Banting Fellowship

For his proposal titled “Nonlinear optics in integrated zero-index media”, Orad has been awarded the prestigious Banting Postdoctoral Fellowship, which will be carried out working under Robert W. Boyd at the University of Ottawa.

“Extracting loss” gets featured as the “Paper of the Week”

Our work “Extracting loss from asymmetric resonances in micro-ring resonators” was selected by the editors of the Journal of Optics as the “Paper of the Week” for the week of May 22, 2017.

Many thanks to Collettjd designs for their expertise and professionalism! We highly recommend their service.

Orad presides as judge for the Weizmann physics tournament 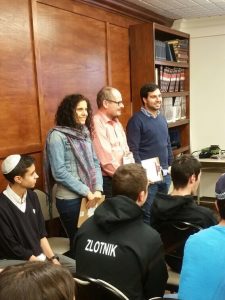 Hosted by Bialik High School in Montreal, 12 teams from Montreal and Toronto competed in the annual safe-cracking competition. Along with Professor Pereg-Barnea from McGill University and Professor Andrea Bianchi from l’Université de Montréal (pictured), Dr. Orad Reshef returned as a judge for the 3rd time. Congratulations to the winners, Bialik team B from Montreal, and Ulpanot Orot Team A from Toronto!

On-chip zero-index metamaterials, which was featured on the cover of the November issue of Nature Photonics, has received a tremendous amount of press and international attention. Below is a selected list of highlights: